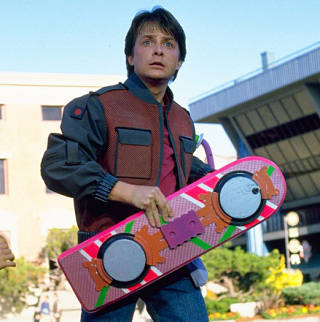 Hoverboard envisioned as blasts of air supporting a skateboard, is not quite a reality. We’ve been dreaming of something like that since Greek mythology’s Perseus’ flying sandals.

Flying cars, well, not yet either, but we do have self-driving cars “flying” around on the roads.

Today is the future that you or your parents were dreaming of back in 1989, while watching “Back to the Future 2″, during what we see now as the embryonic days of technology.

The film makers brought to “life” some ideas (like the hoverboard) as movie props, to help us envision our future. To do that, film makers of the day questioned scientists and futurists about possible technological changes.

For a meanwhile, some of those predictions proved to be quite accurate. If they didn’t exactly cross home plate, they were at least in the ballpark, as the games are now being played out in homes around the globe.

Eyes into the Future

Rewinding to the world as it was during the filming of “Back to the Future, Part II” and watching it with today’s eyes, you’ll spot some startling accurate predictions, such as:

Neil Armstrong said about being the first man to land on the moon:
“It is one small step for man, one giant leap for mankind”.

Technology has made an astronomical step with the Hoverboard – a hands free self-balancing scooter, that can carry a rider for 20 miles at 10 mph and even more.